(Written in Buea, Cameroon and published in the POST newspaper)

Your ears will be hearing many things, but sometimes there are some hearings that puzzle the impulses, calm the blood and benumb every activity of the cells.

After consulting with her at my centre in Buea, Cameroon, we engaged in some light social discussions, yet this middle-aged-woman drew our minds back to another grievous moment of poignancy. She asked sharply, “Doctor, why is it that cancer is killing many Cameroonians like that? Of late it was not so”.

I was quiet, what should I say? Not only in Cameroon, the rate at which cancer is developing in Africa, one cannot easily understand. Cancer has killed many prominent Cameroonians and Africans. I personally have lost many dear ones due to the disease. But you know what? Cancer started coming to Africa only yesterday. Of late, it was extremely difficult to diagnose a single case of cancer in Africa.

I have read many foreign books on cancer, but most of these European and American writers by then, were directing the citizens’ mind to the old African simple dishes. The most popular topic was “Poor Man’s Diet Heals the West of Cancer”.

In our dispensation, today, no European or American writer will teach people to learn from Africans; Africans have left their safe and fine simple diets and have quickly adapted western style of eating. Resent statistics and reports show that, Africans are seriously challenging Americans and Europeans on cancer list.

The devil with these fascinated, attractive items charm many who do not have power to discern his plans and delusions. Look at us Cameroonians, leaving all our natural foods and natural medicines to follow the fascinated world. Cameroonians live in a natural, healthy environment than most places in Africa. Why should one living in Buea, a natural place like this, get sick and die of cancer?

Many Africans have left natural good foods and eating in shops – that has resulted in many developing cancerous cells. Eating in cans is the number one cause of cancer in Europe and America. So, one would not be surprised to see you developing cancer cells in your strong ambition to live as a white man in Africa.

Think about their preservatives. Think about the rusting of tins and cans, which has been the greatest cause of cancer. Yes, a metal cannot mingle itself with the organic fresh of the human body – definitely cancer will occur! Those who are wise and clever always read labels of items sold in shops, and will ask and reason why these statements. (“No preservative added”, “no alcohol”, “no sugar added”, “no caffeine”, “no artificial flavour added”, “no baking powder or soda added”, and so forth); all these have a great lesson for the one going to the shop to reason.

It also means that some people are critical with their health, so the manufactures need to convince them with such endorsements on the labels. These could also mean that preservatives, alcohol, sugar, caffeine, artificial flavouring, baking powder and rest in food items can be seriously detrimental to health. Many carry huge sum of money to shops to buy sickness.

Analytically, people who are exposed to modern civilisation are the very ones dying; and the so-called learned and the rich are greatly affected. Yes, a poor, peasant local mother, with her little money will go to Cameroonian local market, buy some plantain and vegetables, prepare immediately her food and eat simply and naturally, and grow healthier than those who spend much money in shops. So American writers saw this, and started writing; “A poor man’s diet heals the West”.

But today, Africans have left their cultural simple foods and imitate the West. This has always been the spirit of Africans. We do not like our simple things. We are not proud of our own things. We always see our simple things as inferior whereas God who knows better is a Father of Simplicity. Recently I visited one of our nations, the Medical Ministry was doing their best to suppress and condemn natural practitioners and promote Western drugs. That is the spirit of Africans, they do not want theirs, the Lord shall laugh, perhaps they are calling for total doom on their land – I am seriously praying for them. We need to encourage our own.

One thing the devil, Satan has done to ruin humanity with impunity, is his ability to blind our eyes from seeing the beauty of God’s plan for mankind. So look at the condition of Africans. We do not like our foods, our natural medicines and even our continent. Our black skin and the black thick afro hairs are abhorred by many Africans. None praises the beauty of black skin again. So look at our position now.

It is said that the human body is made up of little things: this is true. For the cells to perform their particular functions, they may need twisted strands of a substance found in the centre of the nucleus known as Chromosomes. The chromsomes consist of several millions of long strands, which are more properly called Genes. The gene is the smallest unit of information and in itself another twisted strand of chemical known as Deoxyribonucleic acid, commonly known as DNA.

It is true; life is made up of little things. The DNA will divide to give genes, then the genes in the turn divide to form chromosomes, which are all contained in the Nucleus of a cell. Cells divide to form Tissues, then tissues to Organs, which group themselves into Systems, which join together to form the Human Body.

Our God needs to be feared, considering the way He formed and fashioned man: He combined little, little things in the form of cells to build a giant man. Now what is cancer?

The most common manifestation of cancer could be when the individual notices some strange lumps in the body, especially in breast cancer cases in women. So you need to see your doctor to examine you to know the type of lump. And this is among the ten warming signals of cancer.

unhealed wounds or ulcer on the skin, especially on lips and mouth; changes in bowel and bladder evacuations; unusual discharges and bleeding from the excretory system (the bowels, the lungs or the kidneys and the bladder). Other signs are: changes in the usual features of any existing wart or mole on the skin; persistent indigestion and difficulty in swallowing; hoarseness of the voice and persistent cough; loss of weight; finding it difficult to urinate and persistent feverish complications (in many cases indicating cancer somewhere). However, not all cases would be cancer, so you need to check.

Notice also that, there are many types of cancer. But every cancer is cancer and the causes are almost the same. It may only depend on the specific organ affected. Notwithstanding these, there are other features that lead to cancer of various types. For example, sexual infectious diseases, overdrinking of alcoholic beverages could lead to prostrate cancer; abortion and childbirth and delivery difficulties often result in cervical cancer. Female hormonal imbalances and other gynaecological problems develop to breast cancer.

Apart from these, there are still many others, cancer of the lungs (common among smokers), and another common in this times is cancer of the skin, due to the depletion of the ozone layer.

One bad habit in our dispensation is to see a young-man, who is not naturally bald-headed, moving in the hot sun with a bare head (without hairs). These youths do not apply science when they are going to the barbing saloon, but scientists say that, the ozone (the layer of oxygen) has depleted, so be careful of moving on the sun with bare head. The Bible forbids a man from growing very long hairs, but it does not mean we should not leave at least something small on the scalp of the head to protect us from these direct rays in this tropical, continental area.

Look at the physical characteristics of this plant, it grows on the ground, and spreads, not even easy to gather them in big quantities; just as cancer spreads in the body, and form metastasis, which makes it difficult to arrest and cure. The flowers and the clusters just look like the human brain with its tiny, tiny cells.

With properties such as alterative, expectorant, carminative, tonic and vulnerary; have made it a real anticancer medicine. Gather the tops and slice or chop everything and dry and make a fine granule (not much in sun). Bottle it neatly: infuse 2 teaspoonfuls of the granule in a glass of boiling water; cover for some few minutes; strain and begin sipping slowly. (Lemon juice and honey can be added).
Take this tea graciously for about three to four glasses daily before meals. You will observe that cancerous cells are disappearing, and new cells are gradually forming. Do not do this for only a few days. Take for a long time, it will eventually yield good results. Herbs naturally do not work fast and vigorously to destroy the body as modern drugs often do, they work gradually in order to conserve the body organism.

Take time to take your medicines, gradually and prayerfully you will be cured. Euphorbia hirta has no side effects, you can use it as your daily beverage; even some Africans children, chew it with palm kennel nuts and play with it daily. 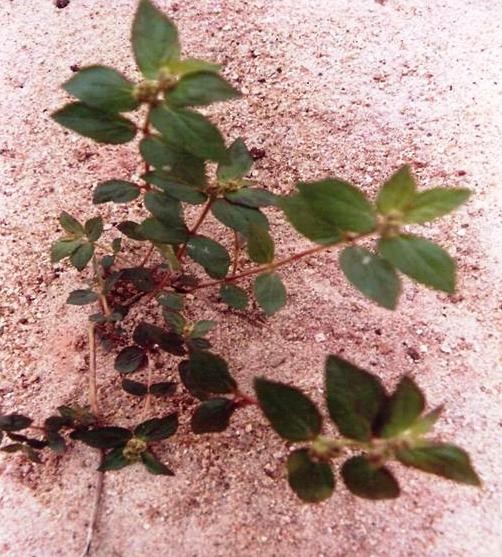 Americans call this locally as “asthma herb” and nevertheless, traditionalists use it for treating asthma because of its expectorant property. It is also good for coughs, calms stomach bites and abdominal pains when chewed. Use herbs: they are life.

Back to Diseases and Cures

Posted in Diseases and Cures.